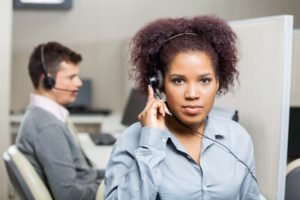 Call center agents have demanding jobs that frequently require putting in many extra hours. Unfortunately, their employers often cheat those same employees out of their rightful overtime pay.

Wage abuse, particularly unpaid overtime, is rampant in the call center industry. This is a violation of the federal Fair Labor Standards Act (FLSA). It is so common the U.S. Department of Labor issued a warning on illegal pay practices targeting call center workers.

There have been reports, for example, that Yelp! is withholding overtime pay from its sales agents. Similar claims have been made against Concentrix, Teleperformance, Huntington Bank, Minacs, Auto Club, Ameridial, Bank of America, and others. In 2016, Sutherland Global Services paid $1.075 million to settle an unpaid overtime lawsuit brought by its call center employees.

The main way employers avoid paying call center workers overtime is by requiring them to perform duties before, after, or even during their shift, which can include:

These unpaid tasks can quickly add up to as much as 30 minutes per shift for some call center workers. Agents also frequently face pressure to not report all the hours they have worked or to work off the clock.

The result is many call center employees may be putting in far more than 40 hours a week but are not being paid overtime by their employers, a direct violation of wage and hour laws.

Some employers also use job titles to cheat call center agents out of overtime. They may give them titles that sound like the employee is a supervisor or manager, when their actual duties are no different from those of an hourly worker. This is done in an attempt to declare the agent exempt from overtime, and violates the FLSA if the worker does not have a managerial job.

Call center employees deserve to be paid for putting in long hours that take them away from their families and cut into personal time. Anything less is overtime theft under the FLSA.